Mark Ghan is vice president for special projects and general counsel at Western Nevada College, which is a member institution of the Nevada System of Higher Education. In this role, he works closely with the president and senior leadership to advance the mission and goals of the college, oversees Human Resources, Information and Marketing, and Institutional Research, is legislative liaison for government affairs, and provides legal services.

Ghan began his employment with the Nevada System of Higher Education as an Assistant General Counsel in 2001.

Ghan graduated from Western New Mexico University with a Bachelor of Arts in English and received his Juris Doctor from the Santa Clara University School of Law. 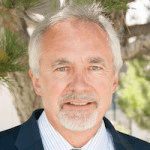