Dr. Mildred García assumed the presidency of the American Association of State Colleges and Universities (AASCU) on January 22, 2018.

As AASCU’s president, Dr. García is an advocate for public higher education at the national level, working to influence federal policy and regulations on behalf of nearly 400 member colleges and universities; serving as a resource to presidents and chancellors as they address state policy and emerging campus issues; developing collaborative partnerships and initiatives that advance public higher education; directing a strategic agenda that focuses on public college and university leadership for the 21st century; and providing professional development opportunities for presidents, chancellors, and their spouses. She is the first Latina to lead one of the six presidentially based higher education associations in Washington, D.C.

Under her leadership at CSU Fullerton, the university saw a 30 percent improvement in six‐year graduation rates and a 65 percent improvement in four‐year graduation rates for first‐time freshmen—both university records; the achievement gap was eliminated for transfer students and cut in half for first‐ time freshmen; and annual gift commitments nearly tripled (from $8.5 million to $22 million). In 2016, for the first time in history, U.S. News & World Report heralded the institution as a top “national university.” In addition, during her tenure as president, the institution was ranked number one in California and second in the nation in awarding bachelor’s degrees to Hispanics, as well as sixth in the nation in graduating students of color.

At CSU Dominguez Hills, she eliminated a structural deficit of $2.8 million; increased media placement by 192 percent; received the highest reaccreditation from the Western Association of Schools and Colleges; exceeded enrollment targets not met previously for eight years; increased donor giving by 140 percent; and increased retention rates for first‐time full‐time freshmen by 10 percent.

Before her arrival in the CSU, Dr. García served as the CEO of Berkeley College, where she was the first system‐wide president for all six campuses.

She has held both academic and senior‐level positions at Arizona State University; Montclair State University; Pennsylvania State University; Teachers College, Columbia University; and the Hostos, LaGuardia, and City Colleges of the City University of New York. Dr. García is also a much sought‐after speaker at national and international conferences and has published extensively in academic journals and contributed to multiple books related to student success, leadership, diversity, equity and inclusion.

Her most recent publications are featured in Latinx/a/os in Higher Education: Exploring Identity, Pathways, and Success (NASPA, 2018) and Leading Colleges and Universities (Johns Hopkins University Press, 2018).
A recipient of myriad honors and awards—from Hispanic Business Magazine’s 100 Most Influential Hispanics in 2007 to The Washingtonian’s Most Influential People in Washington in 2021—Dr. García was appointed by President Barack Obama to serve on the President’s Advisory Commission on Educational Excellence for Hispanics, the U.S. Secretary of Defense to serve on Air University’s Board of Visitors, and the U.S. Secretary of Education to serve on the Committee on Measures of Student Success. She presently sits on the boards of ETS, National Center for Higher Education Management Systems (NCHEMS), National Survey for Student Engagement (NSSE), and American Academic Leadership Institute (AALI). In addition, she serves as the co‐chair for the Bill and Melinda Gates Foundation’s Postsecondary Value Commission. 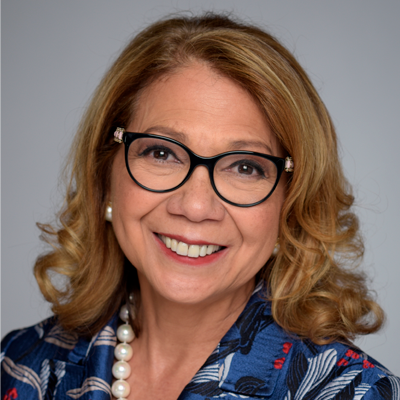