James T. Harris III has served as the President and a Professor of Education at the University of San Diego since 2015. During his time as president, USD has been recognized for its work in environmental sustainability, diversity and inclusion, and advancing the public good. For example, in 2021 The Princeton Review ranked USD among the 50 most “green” colleges. In 2021, USD launched the Horizon Project, a five-year initiative designed to move USD into the forefront of Catholic higher education by following Pope Francis’ guidance that as a Catholic community we must be more “open, inclusive and welcoming”. In the fall of 2021, USD enrolled its most diverse class of students in its history. Last year, USD was ranked #1 in the nation for public service by Washington Monthly magazine. In 2017, the university was recognized as having the most beautiful campus in America by The Princeton Review. USD athletic teams compete in the West Coast Conference and Pioneer Football League.

Dr. Harris also holds the title of President Emeritus of Widener University and earlier in his career served as the President of Defiance College. Dr. Harris has served in leadership roles on several national education associations including CASE, NCAA, Campus Compact, LEAD California, NAICU, CUMU as well as for multiple other state and local governing boards. He currently serves as the Chair of the Monarch School Project in San Diego, a public K-12 school dedicated to serving children who are unhoused.

He has received numerous recognitions for his leadership and service to higher education including being named one of the Top Fifty Character Building Presidents in the Nation by the John Templeton Foundation, receiving the Chief Executive Leadership Award by the Council for the Advancement and Support of Education, and being recognized by the NAACP and for his work in support of civil rights. All three of his alma maters have formally recognized him for his service to society and the Pennsylvania State University Board of Trustees awarded him the distinguished alumnus award, the highest honor given to a graduate. He remains an active scholar and teacher. He and his wife, Mary, have been married for 41 years and have two sons, Zachary and Braden. Both are graduates of USD. 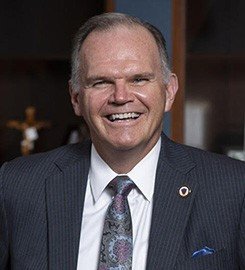