Higher education has been my career of choice right from the beginning. After receiving a masters degree in Biotechnology at the M. S. University of Baroda (1989) followed by a PhD in Life Sciences at the National Institute of Immunology, New Delhi, India in 1994; I did two postdoctoral fellowships in molecular and cellular virology at the University of Nebraska Medical Center (UNMC), Omaha, NE, and then became an Instructor in the Department of Pathology at UNMC in 1997. I joined UNTHSC in 2007 as full Professor and Dept Vice-Chair and then served as the Chair of Cell Biology and Anatomy Dept from Jan 2010 until July 2016. My time as the VPR, initially in the interim capacity, was exciting and productive. In February 2020, I was pleased to accept the appointment of Dean and Vice President for Academic Affairs at Albany College of Pharmacy and Health Sciences.

The long-standing interest of my own research program focuses on the role of glial inflammation in neurodegeneration, particularly in the context of HIV/AIDS and other dementias. I have years of specific training and expertise in HIV-1 biology, molecular and cellular neuroimmunology and experience with primary human brain cells and animal models. I also had the opportunity to establish and direct a core facility including adult human brain cell isolation through rapid autopsies. As PI or co-I, continuously funded by several NIH grants since 2002, I successfully administered multiple projects over the past 15 years. This included conceptualizing the projects, grant administration such as staffing, research protections for human subjects and animal welfare, budget, hands-on training of research personnel and students, productive collaborations with other researchers, ultimately leading to several peer-reviewed, high-impact publications.

As the interim VPR, I see my role in defining and developing UNTHSC research strengths over the next few years that would identify HSC as a strong hold for research excellence locally, nationally and internationally. Establishing UNTHSC as a community leader in biomedical sciences through partnerships with area-wide organizations such as the North Texas Regional IRB and the UTA-UNTHSC Genome center, biomedical sciences focused technology commercialization and economic development are all a part of this bigger vision.

I live in Colleyville with my husband of almost 30 years, my 87-years old physician mother and three cats. We have two sons who are both in college. It is only because of my family’s unconditional love and support that I accomplished what I am most proud of, finding the right balance between career and family that works for us as a team. 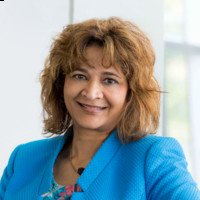